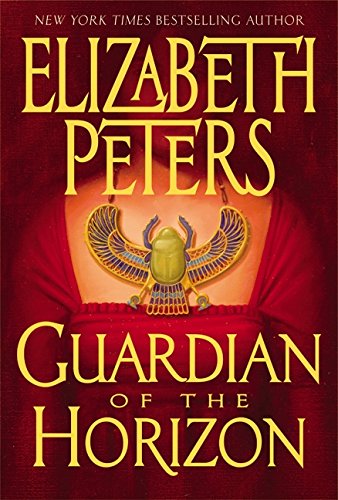 GUARDIAN OF THE HORIZON

Intrepid archeologists Amelia Peabody, husband Emerson and son Ramses have shared numerous exciting adventures, but the 16th volume in MWA Grand Master Peters's bestselling series will have particular appeal for fans. The author fills in a gap in the chronological record (1907–1908) and revisits the hidden city of the Lost Oasis, whose discovery was recounted in (1991). The doughty explorers, including foster daughter Nefret, who is from the Lost Oasis, heed the call of a messenger purportedly from that realm's ruler, Tarek. Peters, as her many accolades would suggest, knows precisely what she is doing as she spins a tale of romance, derring-do, bravery and, of course, deceptions, betrayals and disguises in the classic tradition of H. Rider Haggard, if with tongue often in cheek. Familiar enemies surface (bureaucrats, soldiers of fortunes, despoilers of antiquities, etc.) and dog the group as they travel by ship, boat and camel from their English home to the remote desert location that will test their mettle once again. Peters's knowledge of ancient Egypt and the excavations and desecrations that accompanied early archeological attempts in the region allow her to dress her melodrama with authentic trappings that add greatly to the enjoyment.