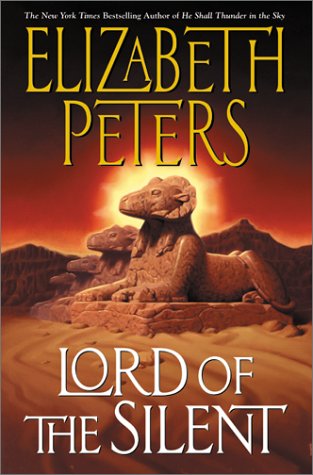 LORD OF THE SILENT

In Egypt, 1915, the redoubtable English archaeologist Amelia Peabody Emerson and her eccentric and closely knit group of family and friends are up to their old tricks. The Emersons may believe that they are merely engaging in another season of excavation, but legions of devoted readers know that Amelia's archaeological fervor has never stopped her from charging into another thrilling episode of crime-solving, dragging her husband and children enthusiastically along. Amelia's son, Ramses, and his new wife, Nefret, are trying to settle into their married life and find ways to build a more equal relationship with their overwhelming and irrepressibly adventurous parent. Amelia is worried, however, that an officious British army officer might try to recruit Ramses again as a spy (as in the previous book, 2000's ). To keep him out of the spymaster's clutches, she sends Ramses and Nefret off to Luxor to investigate a series of thefts from archaeological sites. As always in this series of uproarious Egyptological mysteries, plenty of strange doings are afoot in the desert, and readers will find all the delicious trappings of a vintage Peters extravaganza—lost tombs, kidnappings, deadly attacks, mummies and sinister villains.