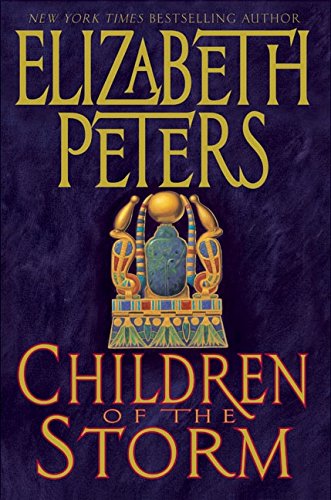 CHILDREN OF THE STORM

A fast-moving, intrigue-filled plot propels MWA Grand Master Peters's 15th novel (after 2002's ) to feature beloved archeologist and amateur sleuth Amelia Peabody Emerson. The end of WWI offers Amelia, now a grandmother, and her family little respite when mysterious events start to plague friends, allies and coworkers. One person dies after suddenly turning to religion, while others fall victim to sabotage. Valuable artifacts go missing, and Amelia's son Ramses is lured into a bizarre encounter with a woman who appears to be the living embodiment of the goddess Hathor. Given the growing unrest against British rule in Egypt, Amelia has to wonder if politics are behind the strange occurrences. In addition, the clan has made many enemies over the course of their adventures. While the preface does a good job of outlining the characters and their complicated connections, the previous 14 novels covered a lot of ground that new readers will find challenging to master. Nonetheless, this is an enjoyable read in its own right, powered by evocative depictions of 1919 Egypt and the engaging voice of Amelia herself—a bright, independent woman, who relishes her role as family matriarch. Her affectionate, give-and-take relationship with her Egyptologist husband, Emerson, continues to enchant.