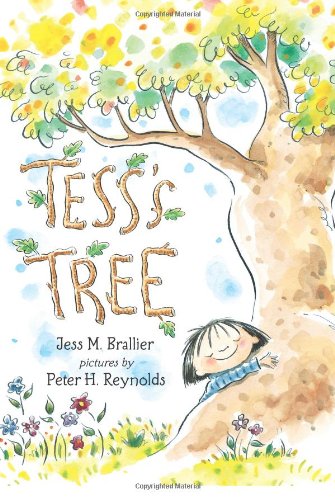 Originally published on FunBrain.com, Brallier's understated, resonant debut tells of a nine-year-old who loves to play beneath the 175-year-old tree in her yard. After a storm weakens the tree, Tess's mother, worried it “could fall and hurt someone,” has it taken down. Initially angry and sad, Tess decides she “couldn't just let it quietly go away” and organizes a celebration of her beloved tree's life (she ties ribbons on a pair of saplings nearby, helping “the children of her tree dress up for the service”). Tess's teacher reads a passage from Robert Louis Stevenson's “The Swing,” and among the many attendees are three people who share Tess's deep affection for the tree—a couple who carved their initials into its bark years earlier, and an elderly woman who climbed its branches as a child (she brings a photograph of herself in the tree to give Tess). Reynolds's ( ) spare, emotive illustrations illuminate the story's messages about cycles of life and the importance of mourning. Particularly affecting is a final image of Tess and the grandmotherly woman standing hand-in-hand beside the saplings. Ages 4–7.