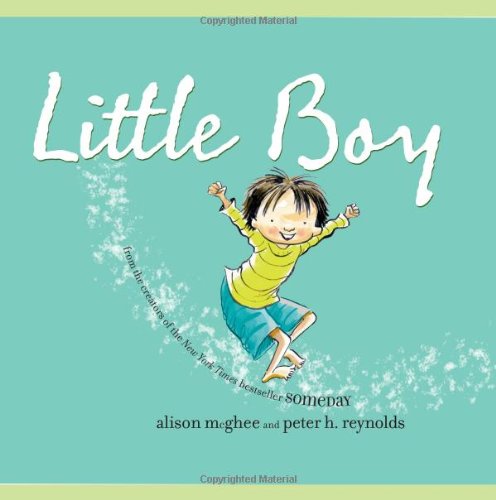 Watching his tousled-haired son navigate a typical day, a father wistfully reflects on boyhood's pleasures—especially the endless possibilities presented by a big cardboard box. McGhee (previously paired with Reynolds for ) uses William Carlos Williams's “The Red Wheelbarrow” as a jumping-off point for the hand-lettered text: “Little boy, so much depends on…/ your starship pajamas,/ that story about llamas,/ the way you don't worry,/ the way you won't hurry,/ and… your big cardboard box.” Keeping props to a minimum in his watercolor-and-ink vignettes, Reynolds portrays the young hero at full kid throttle. Confident, independent and inexhaustible, the boy turns the cardboard box into a pirate ship, a stepladder, a spaceman's costume and a crash pad. In short, he's the very definition of Everyboy—if the computer or TV set had never been invented. Those absences suggest that the book's appeal is a nostalgic one—and that the most appreciative audience may be former boys like Dad himself. All ages.