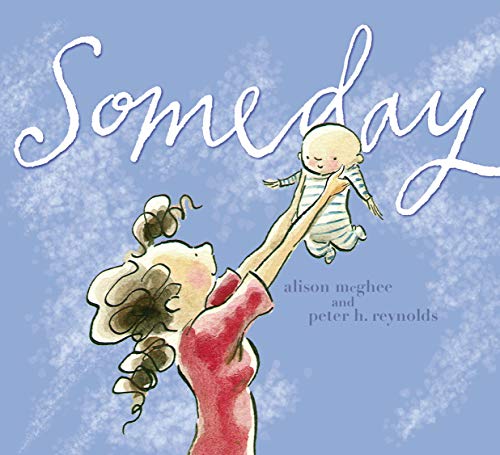 One day I counted your fingers and kissed each one," opens McGhee's ( ) understated yet emotion-charged expression of a mother's love and hopes for her child. Reynolds's ( ) spare, wispy pen-and-ink and watercolor illustrations depict the narrator and her daughter sharing everyday moments that mark milestones in the girl's maturation: the mother watches snowflakes "melt on your baby skin" and crosses the street as her little one grasps her hand. A transitional spread first reveals the youngster on a tricycle, aided by her mother, and then riding solo on a bicycle ("Then, you were my baby,/ and now you are my child"). Quietly the emotion builds, as the mother thinks of the future in store for her daughter, its joys and sorrows: "Someday I will stand on this porch and watch your arms waving to me until I no longer see you." Here Reynolds depicts the woman, older than she was at the book's start, on the left, gazing forlornly across the white expanse of the spread. The narrative comes full circle, as the parent looks ahead to a day, "a long time from now," when her daughter's own hair will "glow silver in the sun." Handlettering by Reynolds augments the story's deeply personal quality, which will resonate with both new and seasoned mothers. All ages.