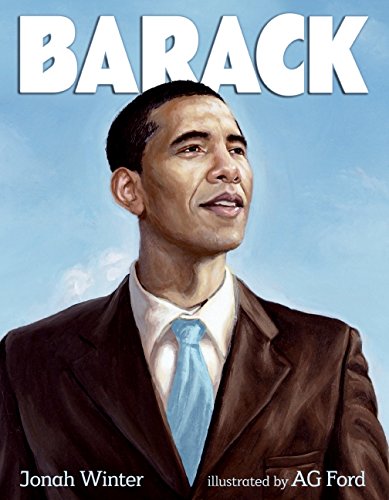 This most recent picture book about a 2008 presidential candidate (see Reviews, Aug. 11 for more books on the subject) could serve as an object lesson in haste: the publisher has said that Winter ( ) turned the text around in two weeks and, unfortunately, it shows. Known for his clarity and lively prose, the author punctuates this biography with clichés. Barack Obama's life is framed as a “journey” through a complicated childhood to “unimaginable heights” (Winter doesn't specify those heights until an endnote, which centers on Obama's presidential campaign). At first Winter depends heavily on existential questions (“Where do I belong?” “Who am I?”), but these are poorly suited to the target audience, and some of his answers are glib. For example, discussing Obama's biracial background, he writes: “So what did that make Obama? For Caucasians, it simply made him 'black.' For some African Americans, though, it made him African American.” Debut artist Ford deserves credit for executing more than 20 paintings in only months; however, his figures are often distorted or strained. Ages 4–7.