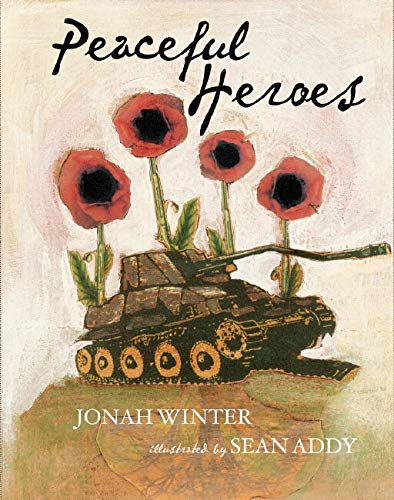 “We need a set of heroes who do not hurt people,” writes Winter ( ) in his introduction to 14 short biographies of figures who have embraced nonviolence, each portrayed by Addy ( ) in stirring, sepia-toned collages. Some are well-known (Martin Luther King Jr., Clara Barton), but many may be unfamiliar, like Abdul Ghaffar Khan, the Pashtun activist who led nonviolent demonstrations against British colonial rule, and Rwandan Paul Rusesabagina, who saved more than 1,200 Tutsis from slaughter. In places, Winter sidesteps violence (Dr. King's assassination is not mentioned), but dark moments remain (in Khan's biography, “The soldiers shot down line after line of the demonstrators until they couldn't stand shooting anymore”). Winter handles religious content with care, but some problems defy simple treatment. The entry for Jesus of Nazareth acknowledges that some “believe he did not exist at all,” while arguing for his historical existence and reminding readers that nonviolence is the essence of Christianity. Still, as a signpost to a richer understanding of peace, the collection has genuine value. Ages 9–12.