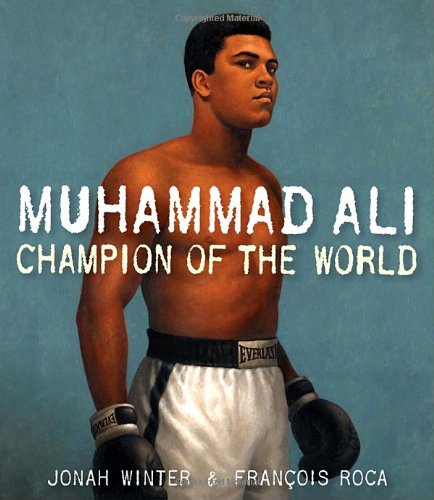 Muhammad Ali: Champion of the World

With biblical references and a reverential tone, this lyrical story of Muhammad Ali paints the fighter (and the history of African-American boxers) in mythic proportions: “ was Jack Johnson.” A subsequent spread features posters of Joe Louis and Sonny Liston, but the grand introduction is saved for Ali, shown running in the rain by night: “And the heavens opened up,/ and there appeared a great man/ descending on a cloud, jump-roping/ into the Kingdom of Boxing./ And he was called .” Roca's ( ) strikingly realistic oil illustrations pack a powerful punch, and his use of light recalls Edward Hopper. He also captures subtle and overt emotions in facial gestures—Ali exudes braggadocio before his match with Liston, and in another scene, white reporters' faces register skepticism at his boasts. Winter's ( ) cadenced, non-rhyming verse highlights just a few episodes from Ali's career and glorifies him as a king and near-miraculous savior, rather than emphasizing hard work on his part, but the result is no less inspiring (“Muhammad Ali was a new kind of boxer—/ and a new kind of person./ And he was creating a new way/ for African Americans to be”). Alongside the veneration is the subtle message that children, too, can achieve all that they imagine. Ages 4-8.