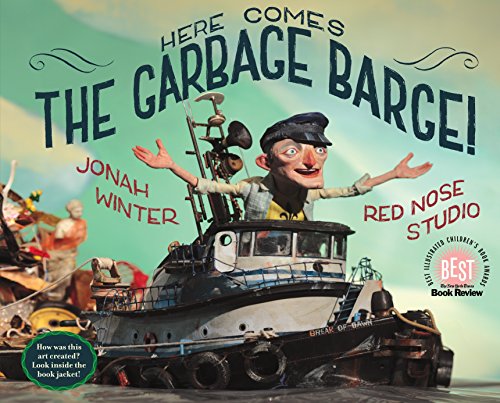 The message is the medium in this zany fictionalized version of the 1987 story of a garbage-laden barge that left Long Island for North Carolina after local landfills closed. To create the book’s innovative artwork, Red Nose Studio, aka artist Chris Sickels, photographed sets he fashioned from recycled materials, found objects, and garbage (the characters are made from acrylic clay). He chronicles this process on the inside of the jacket—a crafty double use of paper in keeping with the theme. Winter’s ( ) bombastic narrative exposes the folly of the six-month journey, as the “Cap’m” of the tug pulling the stinky barge is turned away from port after port. Winter revels in dialogue throughout (“Dere’s dis guy down in Mexico—he owes me a favor,” the captain’s boss tells him), and the artwork is equally gleeful (in Florida, elderly residents floating in inner tubes angrily shake their fists, refusing to let the barge dock). Though kids aren’t likely to miss the message, a sign on a buoy shouts it out: “Moral: Don’t make so much garbage!!!” Funky in every sense of the word. Ages 4–8.