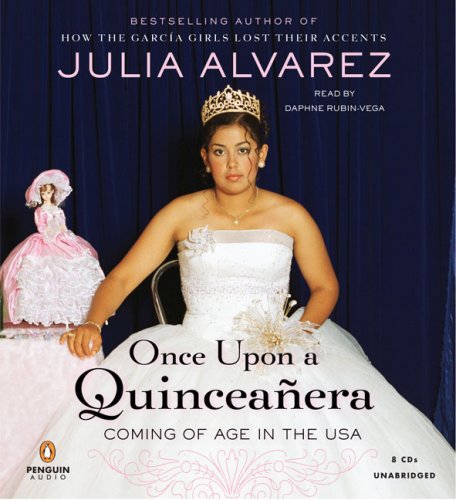 Once Upon a Quinceaera: Coming of Age in the USA

With a voice that is at once huskily mature and sweetly girlish and with a native sense of Spanish pronunciation and rhythm, Broadway star Daphne Rubin-Vega was an inspired choice to narrate Alvarez's examination of the Latina girl's “sweet 15” celebration, the quinceañera, a booming industry now as immigrant families in the U.S. show off their success by throwing fabulous parties for their daughters. As Alvarez interviews and observes teenage Latinas while reminiscing about her own turbulent adolescence in the 1960s, Rubin-Vega alters her sultry tone expertly to contrast the younger generation's brash American attitudes with Alvarez and other older immigrants' more skeptical views. In the second half, Alvarez's writing turns comparatively dry and preachy when she shifts from describing concrete experience to discussing her research into the development of tradition and advocating for a better support system for adolescents. Still, there's plenty to savor in this production, and anyone looking for insight into a phenomenon that will only grow as the Latino population in the U.S. increases will appreciate this skillful presentation of Alvarez's insights into the culture.