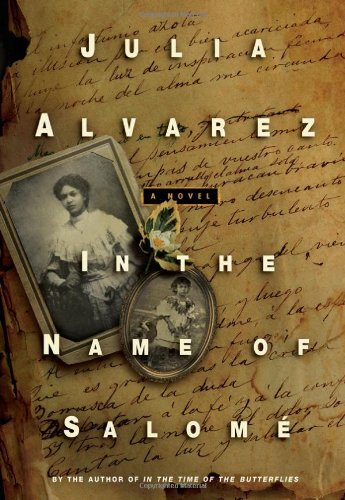 In the Name of Salome

The Dominican Republic's most famous poet and her daughter, a professor in the United States, are the remarkable protagonists of this lyrical work, one of the most moving political novels of the past half century. Camila Henr!quez Ure$a is introduced as an ""eminent Hispanicist, a woman with two doctorates [and] a tenured chair"" at Vassar. She is also the exiled daughter of both renowned Dominican poet Salom Ure$a and the country's last democratically elected president. Born in 1850, Salom called a revolution into being with her fearless poetry. Even as an adolescent, she saw her pseudonymous poems inspire bloodshed in the streets. Camila, born in 1894, followed the fortunes of her famous family into exile, first in Cuba, then on her own in the U.S., where she became an academic's academic. Alvarez, who has written more than once about women in exile (How the Garcia Girls Lost Their Accents) and women revolutionaries (In the Time of the Butterflies), and who is herself a poet, academic and exile, has found in Salom and Camila Ure$a her best topic yet. The novel's protagonists are based on real characters, yet by offering history through the lenses of both the poet and the scholar, as well as by portraying male-dominated events from the perspective of female activists, Alvarez conveys purely Latin American revolutionary idealism with an intellectual sensuality that eschews magical realism. The narrative flows freely across timeDHavana in 1935; Minnesota in 1918; Washington, D.C., in 1923; Santa Domingo in the mid to late 19th century; Poughkeepsie in the 1950sDand is punctuated with letters and poetry. While Salom is the flame that heats this cauldron, Camila tends the fire.When she retires from teaching in 1960, she must choose a meaningful conclusion to her life. Her long-time love, Marion, though recently married, invites her to live nearby in Florida. But born and bred to revolution, Camila has been too long away from the fray. It is not giving away anything to say that she spends the next 13 years in Cuba, heeding the old call to create ""Jos Mart!'s America Now."" $50,000 ad/promo; 22-city author tour. (June)
close
Details