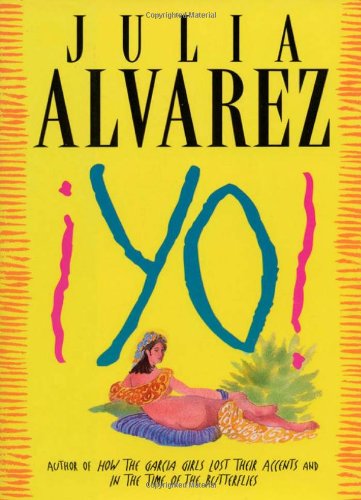 The opening chapter of Alvarez's splendid sequel to her first novel, How the Garcia Girls Lost Their Accents, is so exuberant and funny, delivered in such rattle-and-snap dialogue, that readers will think they are in for a romp. It is narrated by Sandi, one of the four Garcia sisters whom we encounter again three decades after they emigrated to the States from the political dictatorship of the Dominican Republic. As will all the other narrators in this richly textured narrative, Sandi focuses on her sister Yolanda, ""Yo,'' the object of much bitterness and resentment in the family since she has begun to use their lives as material for the books she writes. In the succeeding sections, we flash back to Yo's first years in America, her school and college days, when she exuded pizzazz and potential as a brilliant, if capricious, student obviously destined for a spectacular career. Slowly the canvas darkens, as various people in her life (a cousin on ""the island,'' the daughter of the family's maid, a college professor who is her mentor) create a composite picture of a clever, impetuous, initially strong-willed-but progressively self-doubting and insecure-woman who has lost her early promise. Instead of achieving emotional and professional fulfillment, at 33 Yo is lonely, unfocused, twice divorced, childless and still searching for her identity. Then come several surprising plot twists that leave Yo free to find her destiny. In addition to revealing the details of Yo's complicated life, the 15 chapters are also fully nuanced portraits of their quite varied narrators, whose own experiences range from adventurous to quietly heart-wrenching. Alvarez's's command of Latino voices has always been impeccable, but here she is equally adept at conveying the personalities of a geographically diverse group of Americans as well: an obese woman abused by her blue-collar husband, an ex-football player and an aging Southern hippy, among others. But it is Yo, rocketing among lovers, husbands, self-doubts, shortlived enthusiasms, dead-end jobs and the first tentative satisfactions of a career, whom we get to know obliquely but fully as she belatedly finds the center of her existence. Though her sisters have become fully Americanized, Yo has been the victim of cultural dislocation and of a submerged childhood memory revealed only in the last chapter; she has become a stranger to herself. Alvarez's canny, often tart-tongued appraisals of two contrasting cultures, her inspired excursions into the hearts of her vividly realized characters, are a triumph of imaginative virtuosity. This is an entrancing novel, at once an evocation of a complex heroine and a wise and compassionate view of life's vicissitudes and the chances for redemption. Author tour. (Jan.)
close
Details