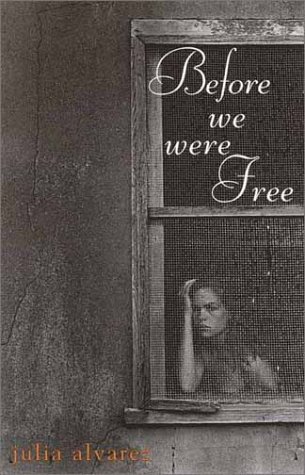 BEFORE WE WERE FREE

In her first YA novel, Alvarez () proves as gifted at writing for adolescents as she is for adults. Here she brings her warmth, sensitivity and eye for detail to a volatile setting—the Dominican Republic of her childhood, during the 1960–1961 attempt to overthrow Trujillo's dictatorship. The story opens as 12-year-old narrator Anita watches her cousins, the García girls, abruptly leave for the U.S. with their parents; Anita's own immediate family are now the only ones occupying the extended family's compound. Alvarez relays the terrors of the Trujillo regime in a muted but unmistakable tone; for a while, Anita's parents protect her (and, by extension, readers), both from the ruler's criminal and even murderous ways and also from knowledge of their involvement in the planned coup d'état. The perspective remains securely Anita's, and Alvarez's pitch-perfect narration will immerse readers in Anita's world. Her crush on the American boy next door is at first as important as knowing that the maid is almost certainly working for the secret police and spying on them; later, as Anita understands the implications of the adult remarks she overhears, her voice becomes anxious and the tension mounts. When the revolution fails, Anita's father and uncle are immediately arrested, and she and her mother go underground, living in secret in their friends' bedroom closet—a sequence the author renders with palpable suspense. Alvarez conveys the hopeful ending with as much passion as suffuses the tragedies that precede it. A stirring work of art. Ages 12-up.