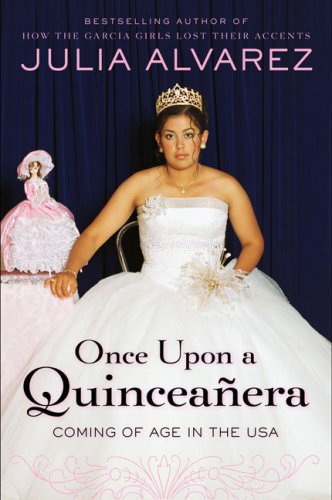 Once Upon a Quinceaera: Coming of Age in the USA

Skillfully blending memoir and social science, Alvarez (How the Garcia Girls Lost Their Accents) explores the quinceañera, the coming-of-age ceremony for Latinas turning 15. She spent a year researching and attending “quince” celebrations, finding out what rituals are favored and what they mean to the girls. She researched what the gowns and photo sessions cost. She interviewed people working in the “quince” industry, from party planners to cake bakers. After all, with more than 400,000 American Latinas turning 15 every year, and with the average quinceañera costing $5,000, the financial, if not the cultural importance of the “quince” should not be underestimated. Alvarez structures her book around one particular girl's ceremony, from the dreamy planning stages through the late hours of the actual, dizzying affair. By intercutting the party narrative with stories from her own youth, Alvarez reminds herself—and readers—that at some point we were all confused, histrionic adolescents. Both sympathetic and critical, she doesn't dismiss the event as a waste of hard-earned savings or as a mere display of daughters for the marriage market; nor does she endorse it as the essential cultural tradition connecting Latinas to their roots. Instead, Alvarez wants readers to focus on creating positive, meaningful rites of passage for the younger generation. (Aug.)