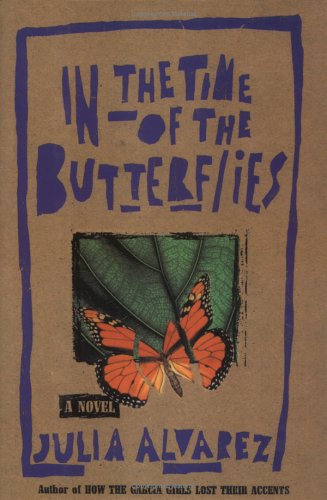 In the Time of the Butterflies

During the last days of the Trujillo dictatorship in the Dominican Republic, three young women, members of a conservative, pious Catholic family, who had become committed to the revolutionary overthrow of the regime, were ambushed and assassinated as they drove back from visiting their jailed husbands. Thus martyred, the Mirabal sisters have become mythical figures in their country, where they are known as las mariposas (the butterflies), from their underground code names. Herself a native of the Dominican Republic, Alvarez ( How the Garcia Girls Lost Their Accents ) has fictionalized their story in a narrative that starts slowly but builds to a gripping intensity. Each of the girls--Patria, Minerva and Maria Terese (Mate) Mirabal--speaks in her own voice, beginning in their girlhood in the 1940s; their surviving sister, Dede, frames the narrative with her own tale of suffering and dedication to their memory. To differentiate their personalities and the ways they came to acquire revolutionary fervor, Alvarez takes the risk of describing their early lives in leisurely detail, somewhat slowing the narrative momentum. In particular, the giddy, childish diary entries of Mate, the youngest, may seem irritatingly mundane at first, but in time Mate's heroism becomes the most moving of all, as the sisters endure the arrests of their husbands, their own imprisonment and the inexorable progress of Trujillo's revenge. Alvarez captures the terrorized atmosphere of a police state, in which people live under the sword of terrible fear and atrocities cannot be acknowledged. As the sisters' energetic fervor turns to anguish, Alvarez conveys their courage and their desperation, and the full import of their tragedy. 40,000 first printing; $40,000 ad/promo; reprint rights to NAL; 20-city author tour. (Sept.)
close
Details