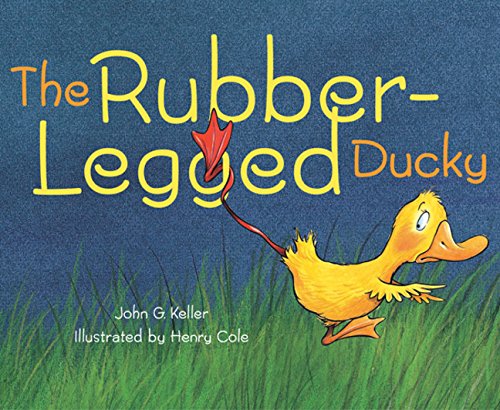 An ugly duckling of a different feather—one with a rubber leg—turns his deformity into an asset in this quirky and triumphant picture book. Five, the fifth duckling born to Mama Duck (she ate a rubber band before laying her eggs), bounces instead of waddles and says “Bing-boing!” instead of “Quack quack.” But steady encouragement from his mother helps Five draw on his unique stretching abilities and outwit a lurking fox. Debut author Keller, the former publisher of Little, Brown's children's division, skillfully balances silliness and heart in a well-paced text that will entertain as well as reassure readers who are discovering what it means to be tolerant and confident. In his signature style, Cole ( ) creates a cast of creatures with particularly emotive expressions who wrest the humor from Keller's premise (“Five let Three strum on his leg while they sang a duet. 'Thrum, thrum... bing-boing... quack!'”). This peppy outing should prove a welcome addition to the self-esteem-building canon. Ages 3–7.