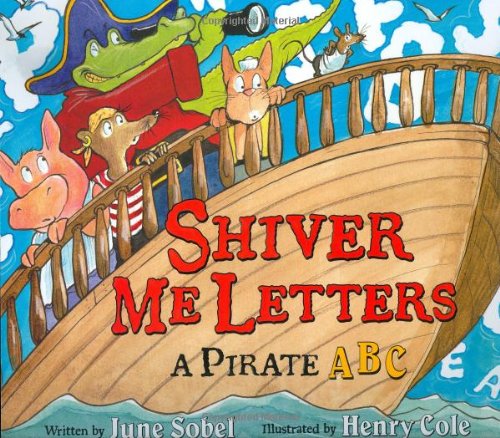 Shiver Me Letters: A Pirate ABC

Those looking for an "M is for Matey" type of treatment will have to plunder elsewhere, as Sobel's ( ) alphabet does its playful swashbuckling in a slightly less traditional manner. True enough, Sobel's bossy pirate captain (depicted as an alligator wearing a rubber-ducky inner-tube around his waist) sets the seafaring adventure afloat when he roars quasi pirate-speak from the deck, " 'R's not enough./ We need other letters/ to make us tough.'/ 'Let's sail far away/ to find ABC's.' " A motley, if enthusiastic crew of yellow-toothed animal buccaneers rallies to his cry for a treasure hunt, chronicled in the jaunty rhyming story on the subsequent pages. "The anchor went into an !/ A floated by on the crystal clear bay." Young readers will find plenty of maritime and pirate-centric booty, including , , , , and certainly marking a special spot as they spy each letter printed in a bold red typeface. Cole's ( ) rollicking, sweetly comic watercolors capture typically imagined details from a pirate band—deck swabbing, a tyrannical leader, walking the plank. And Sobel's action-filled story line gives the artist lots of leeway to be creative with other funny bits, too. Ahoy! A nifty concept book. Ages 2-5.