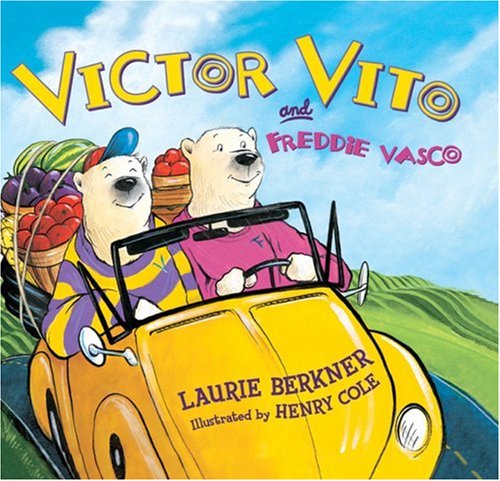 VICTOR VITO AND FREDDIE VASCO (TWO POLAR BEARS ON A MISSION TO SAVE THE KLONDIKE CAF!)

Musician and children's performer Berkner ( , ) adapts one of her fun-flavored tunes as a picture book. Unfortunately, what works so well as a catchy, silly sing-along in concert isn't as successful in print. Here, Victor Vito and Freddie Vasco take on the guise of two polar bears who own a café in Alaska. With their customers tiring of the same old local fish fare, the duo decides to close up shop and travel the lower 48 in search of new taste treats and recipes. The trip is chronicled like so: "Victor Vito and Eddie Vasco/ ate a burrito with Tabasco./ They put it on their rice./ They put it on their beans/ on their rutabagas/ and on their collard greens." This verse, and the refrain, "Hey Victor!/ Hey Freddie!/ Let's eat some spaghetti," repeats several times, which makes for a scattershot plot. Finally, the bears return home with a revamped menu in mind. Cole's nimble watercolors bring readers on a quick coast-to-coast culinary adventure, clearly stretching the song beyond its borders. Humorous details include the friendly, lumbering Victor and Freddie loading up their Volkswagen Beetle with supplies, and the walrus cooks and seal waitresses back in Alaska reading postcards from their bear bosses. A CD recording containing Berkner's infectiously fun performance of "Victor Vito" and another of her original tunes, "Bumblebee (Buzz Buzz)," is included. Ages 4-8.