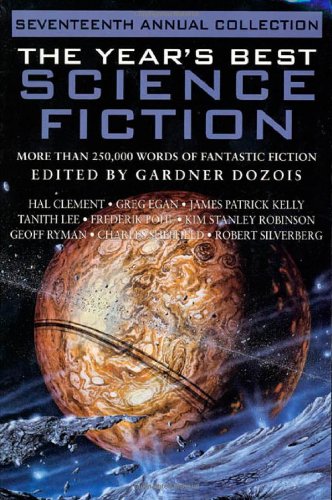 As in previous volumes in this series, Dozois, who has won the Hugo for Best Editor 11 times, again presents a large helping of stellar short SF. Nine of the 27 stories are, quite appropriately, from his own magazine, Asimov's, which continues to dominate the various genre awards. Dozois also includes four stories each from Fantasy and Science Fiction and the British Interzone. Also represented are Analog, Amazing, Science Fiction Age, and two semi-pro magazines, Absolute Magnitude and the Australian Altair, as well as such original anthologies as Moon Shots, Not of Women Born and the Canadian Tesseracts. Among the high points are two time-travel pieces, Kage Baker's story of San Francisco before the great earthquake, ""Son Observe the Time,"" and Michael Swanwick's pre-historic time-paradox tale, ""Scherzo with Tyrannosaurus""; Eleanor Arnason's understated story of alien gender-role reversal, ""Dapple""; Kim Stanley Robinson's ""A Martian Romance,"" which is set not in the world of his Mars trilogy but in a subtly alternate universe; and Greg Egan's ""Border Guards,"" hard-SF that imagines a future in which immortality is a given and soccer is played using the principles of quantum physics. Also included is quality fiction by such luminaries of the field as James Patrick Kelly, Frederik Pohl, Ben Bova, Robert Silverberg and Paul McAuley, plus such rising stars as David Marusek, Alastair Reynolds and Sage Walker. As usual, the anthology begins with a detailed survey of the year in SF and ends with a long list of Honorable Mentions. Dozois's annual volume remains a standard by which the field of SF should be judged. (July)
close
Details