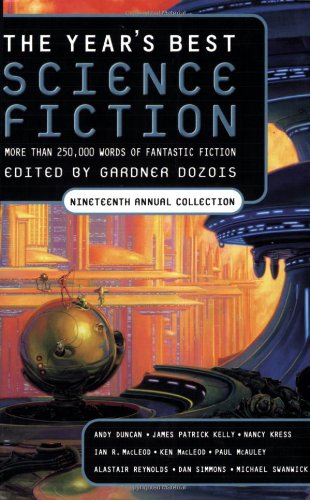 This annual anthology remains the best one-stop shop for short fiction, and it's a must for fans of literary SF. The notion of intelligence links several stories. Nancy Kress, in "Computer Virus," posits an intelligent computer program trying to save its life, but it does so by risking that of a child. The dense and busy "Lobsters" by Charles Stross considers the implications of denying intelligent uploaded constructs—here, of lobsters—human rights or autonomy. Michael Blumlein's zany "Know How, Can Do," easily the best story, posits a self-aware worm linked to a human brain, told from the point of view of the worm, "Flowers for Algernon"–style, as it acquires human intelligence, language and emotions. Alternative realities remain a productive theme. In "The Two Dicks," Paul McAuley posits an alternative reality where Philip K. Dick, who in this world wrote mainstream fiction instead of SF, meets Nixon. Ken MacLeod's ambitious, character-driven "The Human Front," set in an alternative reality just a little different from ours, describes a man's growth toward adulthood in a war-torn Britain. Dan Simmons, Alastair Reynolds, Maureen F. McHugh and Paul Di Filippo also contribute especially memorable tales. Although one could quibble with Dozois's choices—and there are one or two clunkers in here—this anthology is an enjoyable read that overall maintains high standards of quality and variety. It's essential for SF fans who simply don't have time to separate the wheat from the chaff on their own.