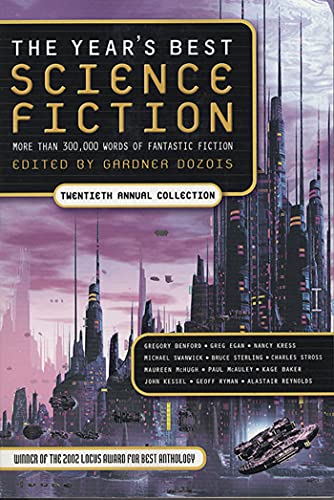 Drawing from his own magazine, , as well as a wide range of other publications from the U.S., U.K. and Australia, Hugo-winner Dozois presents SF that is both provocative and literate in this respected annual anthology. In Michael Swanwick's powerful "Slow Life," alien life turns up where it's least expected. "The Political Officer" by Charles Coleman Finlay is a taut cloak-and-dagger tale of the search for a double agent aboard a military spaceship on a crucial mission. Richard Wadholm's "At the Money" extrapolates the wheeling and dealing of a distant future where ultradense elements manufactured in the heart of stars form the basis of an unpredictable interstellar economy. "The Old Cosmonaut and the Construction Worker Dream of Mars" by Ian McDonald is simultaneously an elegy for both manned space flight and the pristine worlds those astronauts dreamed of exploring. Back on Earth, "The Most Famous Little Girl in the World" by Nancy Kress shows how a single event can warp the fates of millions, while Maureen F. McHugh reminds us that the most advanced medical science may not be enough to restore true "Presence." Geoff Ryman's "V.A.O.," in which an elderly hacker takes on a criminally deficient health care system, offers a bit of black comedy. Exotic settings, memorable characters and challenging themes are par for the course here. Once again Dozois has gathered together a stunning array of the best in shorter SF.