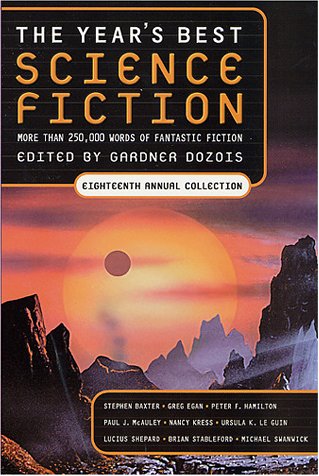 This annual anthology is quite simply the best, most comprehensive look at today's SF, with 22 stories of consistently excellent caliber, some displaying gonzo writing and others displaying dizzyingly fabulous premises. Dozois has chosen stories that define the genre and its trends today—tales that show that SF continues to fruitfully forge across new boundaries.

The alternative/parallel history is growing as a subgenre, with a sophisticated premise of the nature of alternative realities from Greg Egan's "Oracle" suggesting that humans can learn to control their destinies. Charles Stoss's "Antibodies" follows operatives working in parallel realities to stop artificial intelligences from attaining consciousness, with a surprise ending that ties the story up neatly and unexpectedly. And Rick Cook and Ernest Hogan show some impressive world-building in "Obsidian Harvest," a murder mystery set in a strange, beautifully worked alternative reality in Mexico, years after the natives drove away the Spanish invaders. The soldier-battling-evil story, a staple of SF, has grown sophisticated, with Alastair Reynolds's "Great Wall of Mars," Stephen Baxter's "On the Orion Line" and Stoss's "A Colder War" exploring the ambiguities and compromises inherent in warfare. Reynolds considers a soldier who realizes that the enemy may be in the right. Baxter's heroes fight inexplicable aliens attempting to slow human expansion. And Stoss's government operatives engage in battle via doors to other planets in an entry that contains a wryly amusing alternative-history take on the Oliver North scandal. Technology's impact on biology remains a rich vein as well. Ian McDonald considers an Africa being eaten by alien machines that may give humans amazing powers and control over their lives in "Tendeléo's Story"; Brian Stableford's "Snowball in Hell" considers a world in which animals can be tinkered with to create humans, thus complicating the nature and superiority of humanity; and Susan Palwick's oblique "Going After Bobo," the story of a boy whose cat runs away, turns into a delicate consideration of the role of electronic surveillance and how it comes to define a family.

Finally, a few entries are remarkable for their excellent writing. Standouts include Stoss's two stories; Ursula K. Le Guin's first-contact yarn, told from the point of view of aliens, "The Birthday of the World"; Albert E. Cowdrey's hilarious "Crux," a time-travel adventure with a screwup protagonist; and Eliot Fintushel's amazing "Milo and Sylvie," about a young shape-shifter who painfully comes to learn about himself and his powers.