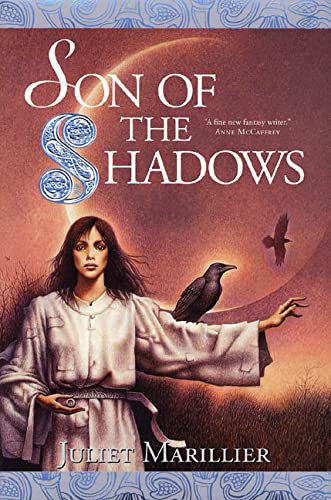 SON OF THE SHADOWS

Druidic Erin (Ireland) is a place teeming with fairies and earth magic. But this compelling story is not a tale of the fey—it is a tale of one who lives in the world of humans and yet has contact with the otherworld. Liadan of Sevenwaters is the child of Iubdan and Sorcha (whose story was told in ) and she is granted the power to hear and see what others cannot. She is a healer of mind, body and spirit. It is Liadan's gift of healing that brings about a meeting with a mercenary considered to be the enemy of her family. Liadan names this man without a name or history "Bran" and soon realizes that the information she has been told about him (and the world in general) is not what it appears to be. In too short a time, Liadan comes to love Bran with a fierceness that she never imagined possible, and yet their love cannot be fulfilled. Bran's life is not her life, nor is her life his. They must travel down different paths (at least for a while), knowing in their hearts that the bond between them is stronger than the things that pull them apart. This is the story of a powerful love, which might change the course of history for Liadan's people and the island of Erin. Beautifully written, the second in the Sevenwaters trilogy continues a sparkling saga of a family whose destiny is to help free Erin from British tyranny. The story, though a bit light on the magic and heavy on the romantic, is reminiscent of Jennifer Roberson's Chesuli series. Fantasy addicts should love it.