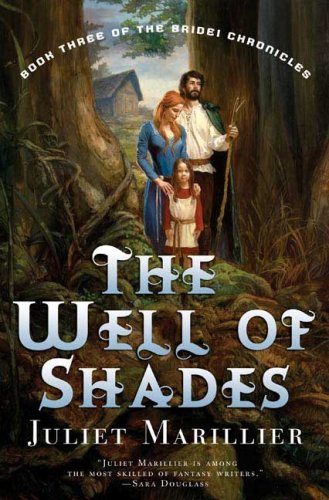 The Well of Shades: Book Three of the Bridei Chronicles

In this captivating third installment in Marillier's historical fantasy series (after 2006's ) set in the sixth-century Scottish Highlands and Ireland, Faolan of the Uí Néill clan—bard, assassin, spy and adviser to the Pictish King Bridei of Fortriu—must complete three difficult missions. For Bridei, he must track down a cleric named Colmcille. For his own peace of mind, he must return home to Erin and confront his past. (Ten years earlier Faolan faced an impossible choice that shattered his family and left his eldest brother dead.) For his deceased comrade Deord, he must bring news of the warrior's death to the man's family in Cloud Hill, a task that lands Deord's impoverished 16-year-old daughter, Eile, and her toddler in Faolan's care. Faolan brings Eile back to the court of King Bridei, where they find themselves enmeshed in a plot against the king's half-fey son, Derelei. Despite some anachronistic instances of liberated female behavior and a few discordant modern colloquialisms, this episode will appeal to series fans and new readers alike.