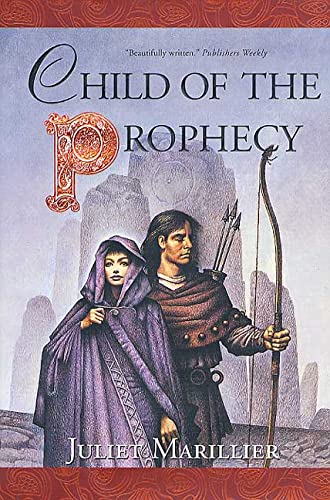 CHILD OF THE PROPHECY: Book Three of the Sevenwaters Trilogy

In the final book in her Sevenwaters Trilogy, Australian Marillier gathers the threads from the first two ( and ) and weaves them together into a rich tapestry of love and loss, family loyalty and personal sacrifice. The saga of the guardians of the forest at Sevenwaters takes up the story of Fainne, daughter of the former Druid Ciaran and the lost Niamh. Raised in the ways of magic, Fainne plans to become a solitary sorcerer like her father, but fate intervenes in the form of her grandmother, Oonagh, a sorceress with a penchant for cruelty and a desire to put an end to everything the Sevenwaters folks stand for. A prophecy tells of a way to preserve the old magic, and Lady Oonagh is willing to trick her granddaughter and torture her own son to break it. Though Fainne is forced to bow to her grandmother's will, the love of her family and her own strong ethics help her remember her true nature, as she learns about herself, her powers of sorcery and the part she plays in a prophecy that has tested three generations of women. Though the romance elements that dominated occasionally appear, this book centers on personal growth and filial duty; it can be enjoyed as a read-alone book, but is better understood with the preceding titles. Marillier's strong voice and rolling, lucid prose seem appropriate for a 10th-century Irish tale, and her command of a fantasy story's elements make this an excellent conclusion to a fine trilogy.