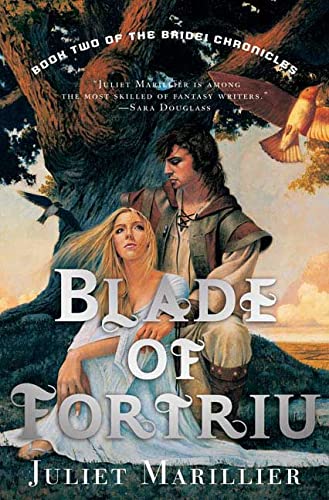 Blade of Fortriu: Book Two of the Bridei Chronicles

Loyalties are tested and truth must be distinguished from dangerous lies in the gritty second book of the Bridei Chronicles (after 2005's ), set in a land resembling early Scotland. Hoping to gain the support of nearby chieftain Alpin of Briar Wood in the fight against the invading Dalriada, King Bridei of the Priteni sends an offer and a bride: Ana, a fosterling "hostage" from the distant Light Isles raised in his court. Bridei's personal bodyguard and spy, Faolan, accompanies Ana on the arduous journey, saving her life and struggling to control his growing feelings for her. When problems arise at Alpin's rude court, Ana secretly finds solace with Alpin's mysterious brother, Drustan, long believed to be insane, who has been imprisoned for the murder of Alpin's first wife. Skilled world-building and characterization set Marillier's historical fantasy at the head of the pack.