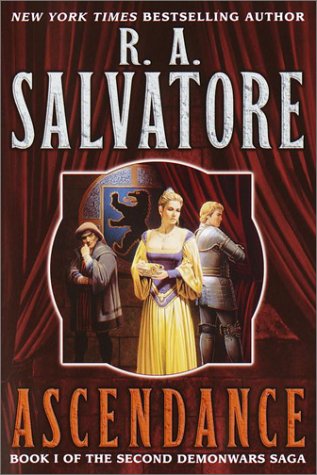 ASCENDANCE: Book One of the Second DemonWars Saga

Fans of bestseller Salvatore (, etc.) will welcome the chance to follow favorite characters through yet another epic saga of good versus evil in this start to a new trilogy, in which good-hearted Jilseponie "Pony" Wyndon and her dreaded enemy, cleric-turned-weretiger De'Unnero, are caught up in fresh intrigues that tear at the civil and religious heart of the land called Honce-the-Bear. Pony, now wise to "the truth of God, of spirituality, of living beyond this mortal coil," rules as well-liked Baroness of Palmaris during an age of unprecedented peace and prosperity. Unknown to her, however, scheming elf Lady Dasslerond has taken Pony's "unborn" son, Aydrian, whom Pony thought she lost in battle during the first DemonWars trilogy, to raise in secret. Grown into young manhood, talented Aydrian chaffs against lessons in rangering and gemstone magic. He longs to make a name for himself even bigger than that of his famous father, Ranger Elbryan (aka "Nightbird"), killed by De'Unnero, and later runs away from his elven teachers and assumes the role of "Nighthawk." While Pony ponders an offer of marriage from good King Danube, De'Unnero comes out of hiding to manipulate Aydrian into destroying Pony and helping him take control of the kingdom. The many plot twists are clumsy and all too convenient, while the book concludes predictably with Aydrian gaining the upper hand over his mother and her allies.