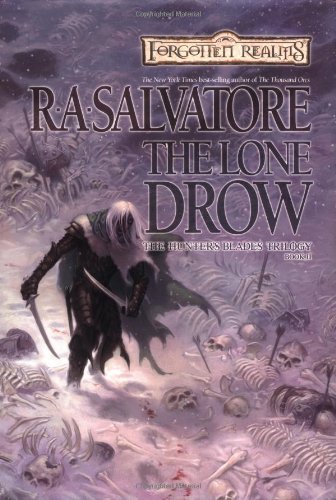 At the start of bestseller Salvatore's second book in his Tolkienesque fantasy trilogy (after 2002's ), hordes of orcs, led by cruel King Obould Many-Arrows, sweep down mechanically and unexcitingly on beleaguered dwarves. When he isn't slaying orcs, the story's hero, the dark elf drow loner Drizzt Do'Urden, suffers guilt for allowing a friendly elf to die in his stead and is attracted to Catti-brie, a beautiful human woman who is the ward of the dying dwarf king, Bruenor Battlehammer. The usual fantasy suspects—gnomes, trolls, elves, flying horses, unicorns, giants—crowd the pages, but the author does at times rise above cliché, and a few characters do achieve some complexity. Obould actually speaks of economics, while an elf, Innovindel, having lost her mate in battle, talks pensively of the centuries of her life, in contrast to the paltry few years of human life. This difference is significant to Drizzt, because Catti-brie is only human. Finally, in a moment lifted straight from Tolkien, Salvatore revives the comatose Buennor Battlehammer, like Gandalf, to lead his forces against the orcs. Fans will eagerly await further developments in volume three.