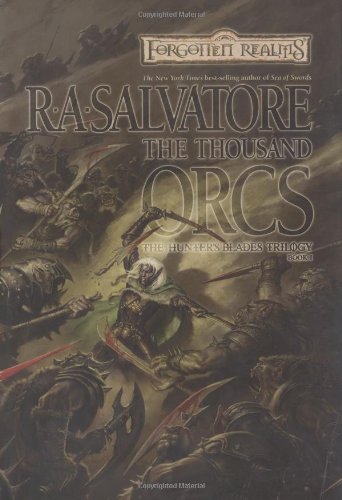 THE THOUSAND ORCS: The Hunter's Blades Trilogy Book I

Drow Elf Drizzt Do'Urden and friends return for another rousing tale of derring-do and harrowing escapes, the first volume of a new trilogy in Salvatore's bestselling Forgotten Realms series. Catastrophe is about to strike, and Drizzt and his intrepid fighters once again rush eagerly into the fray. What starts out as a quiet trip back to Mithral Hall for the crowning of King Bruenor Battlehammer turns unexpectedly into a journey far longer and more perilous than Drizzt and company could have supposed. Unbeknownst to the Drow Elf, a group of orcs, headed by King Obould, who fancies himself an especially clever orc, has decided to join forces with a group of frost giants to lay waste to the area around the dwarven hold of Mirabar. Drizzt and his group stumble into the middle of a skirmish and, thinking that it's just a small group of orcs, decide that they need to do a bit of clean up work. What Drizzt doesn't know is that these early skirmishes are the prelude to a bigger invasion that amounts to nothing less than an all-out war. The philosophical Drizzt spends his downtime pondering the frailties of humanity, which adds a bit of depth to an admittedly light-hearted sword and sorcery novel. A nifty cliffhanger promises more excitement to come in the sequel.