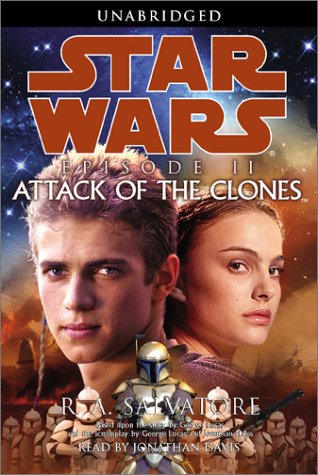 "Clouded is the force, troubling it is." Beginning with the familiar strains of the Star Wars theme, this production of Salvatore's epic tale is executed wonderfully. Punctuated with sound effects and bursts of John Williams's music, Davis delivers this yarn as if it were a tale of utmost importance, which it may well be to the many fans of the tales from "a long time ago in a galaxy far, far away." Davis, a veteran Star Wars reader, recounts the "legendary" tale with drama and awe. His narration is riveting and his role-playing is convincing. While an audio reading of a book based upon a movie based on a story by George Lucas may seem a bit of a stretch, this one-man audio drama is destined for repeat road-trip listening for young Jedi. And maybe with exposure to multiple performances, the older generation will eventually be able to untangle the complex story line and discern the Republic from the Federation; the droids from the clones.