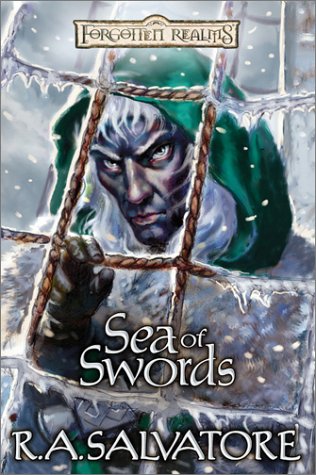 Elf ranger Drizzt Do'Urden and his gifted warriors go in search of a missing member of their own band in this latest fast-moving fantasy adventure from bestseller Salvatore (, etc.). In the previous episode of the Paths of Darkness series (of the Forgotten Realms umbrella series), Wulfgar the barbarian fought a demon, was possessed and supposedly killed. Now it turns out that not only is he alive but he is in need of the type of assistance at which his friends excel. Getting to Wulfgar and aiding him in his quest for Aegis-fang, his warhammer, is only part of the fun. Drizzt Do'Urden, along with Cattie-Brie, a dwarf named Bruenor Battlehammer and Regis the Halfling, often have to battle the obligatory orcs, goblins and ogres on their way to the real business at hand. A second plot involves the stalking of Drizzt Do'Urden by Le'Lorinel, a Moon elf (or pale elf, whereas Drizzt is a Drow or dark elf). The author combines some of the good versus evil of Robin Hood and his merry men, the campy heroics and friendship of (including an appearance of dread pirate Sheila Kree) and a rather unfulfilled stab at race relations with Le'Lorinel's unhinged hatred for Drizzt Do'Urden. As this is the fourth novel in the subseries of a larger series, it is not for the uninitiated. Long-awaited by Salvatore's legions of fans, however, this book is as certain as its predecessors to climb bestseller charts.