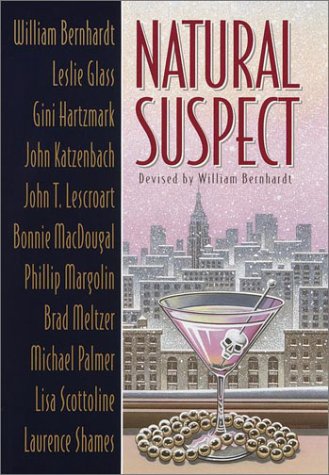 First there was , a novel written round-robin by staff, then , a serial crime caper from Miami-based writers. Now, here's a legal thriller wherein each succeeding chapter has been created by recognized pros in the genre. The roster of authors includes Leslie Glass, Gini Hartzmark, John Katzenbach, John Lescroart, Bonnie MacDougal, Phillip Margolin, Brad Meltzer, Michael Palmer, Lisa Scottoline and Laurence Shames—all of whose contributions appear without bylines. Saluting and satirizing the tricks of the trade, Bernhardt starts the story off on a Long Island estate as oil mogul Arthur Hightower threatens to divorce his martini-soaked wife, Julia, and cut off his wastrel children. Before he makes good on the threat, Arthur's frozen corpse is discovered in the basement freezer. Julia hires Devin Gail McGee to defend her in court, not knowing Devin once shared a hot tub with the handsome prosecutor. Bernhardt laces his opener with possibilities, then each author in turn uncovers clues and miscues, from the toe cut off by the movie-quoting thug in clown costume to one lawyer's unseemly devotion to his voyeuristic pet rabbit. The fun for readers of this team tour de force is not to solve the case but to guess which author penned which chapter. Remarkably, the ending ties up more loose ends than anyone has a right to expect. More publishing than literary event, more mind game than artistic accomplishment, the book is an over-the-top diversion, with each author attempting to be more clever than the one before. There are some hits and some misses, but most of the curveballs are fun.