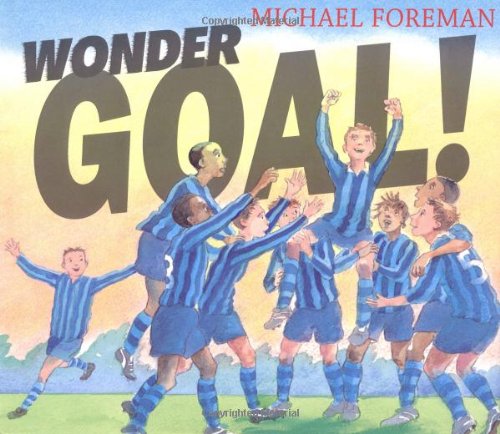 Foreman's () appealing, understated story opens as a team of boys arrives at a field for a soccer game. Teased by the others, the new boy is determined to "show them"—and he gets his chance. Remembering his father's advice ("Head over the ball, balance, power, timing"), the lad executes the perfect kick. As the goalie leaps for the ball, the boy imagines that time stops and his vision of the lunging goalie freezes, "like a photograph.... Like all those photographs that crowded the walls of his tiny bedroom." Foreman shows the boy asleep, surrounded by images of world-class soccer players, dreaming of scoring a "wonder goal" and winning the World Cup. Fast-forwarding the narrative, the artist depicts another goalie making a similar attempt to block another unstoppable ball. But this time the action is in an enormous stadium, and the boy is now a man, scoring in a World Cup game. Foreman gives his narrative an affecting emotional edge: the boy has lamented that his father, working overtime, missed his first wonder goal; the second time, his dad is there to see it. Rendered in Foreman's usual clean style, the watercolors hold some welcome surprises, for example, clouds assume the shape of the players' silhouettes when mention is made of their shared dreams of soccer stardom. This winning tale will score points with anyone who dreams of athletic glory. Ages 4-8.