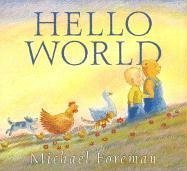 Foreman ( ) taps into a child's sense of wonder and discovery as he awakens to the world around him with this simple journey of a boy and his teddy bear. "Wake up, Baby," says the teddy bear to his young owner as the sun rises outside the window. "Let's go and see the world." As bear and boy venture forth, the bear entices other animals to join them with the promise of what might be found at journey's end. A passel of puppies asks, "Will there be fields to run in?"; a frog and her brood hope to find "a warm rock to rest on." Working in watercolor, pastel and pencil, Foreman brings a shimmery, sunlit warmth to his oversize spreads, and the palette adjusts to the sun's changing position in the sky. The ever-growing collection of animals will tickle the imaginations of anyone who has played follow the leader and hints at the infectiousness of the heroes' sense of adventure. While the characterizations of the boy and bear seem curiously schematic—(the bear's head at times takes on a blank, balloon-like appearance), the other travelers come to life with softly textured washes of color and eager expressions. At book's end, the world delivers every animal's wish and more: as the group gathers on a hilltop at twilight, a final double gatefold spread reveals turquoise starry depths and a benevolently smiling moon. Ages 2-up.