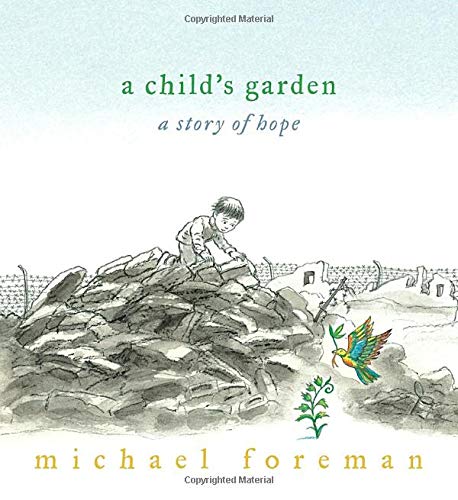 A Child's Garden: A Story of Hope

War has reduced a boy's home to ruins, and a heavily patrolled barbed-wire fence surrounds his land, keeping him from the verdant hills he loves (“The boy knew that cool streams flowed in those hills. He had once gone there with his father, but now the hills were on the wrong side of the wire”). But by cultivating a tiny grapevine sprig and discovering a like-minded girl on the other side of the fence, the boy gains hope for a future of peace and reconciliation. Foreman's soft, gray-toned watercolors (punctuated, as the story unfolds, with the brighter springtime hues of the mammoth grapevine and the birds that inhabit it) set an appropriately somber tone and move the story forward through the boy's triumphs and setbacks (soldiers rip the vine from the fence, the colors become muted as winter descends). But the text is overly literal and emotionally heavy-handed (“ , thought the boy. ”), and even children with a strong political conscience may bridle at its preachiness. Ages 3–up.