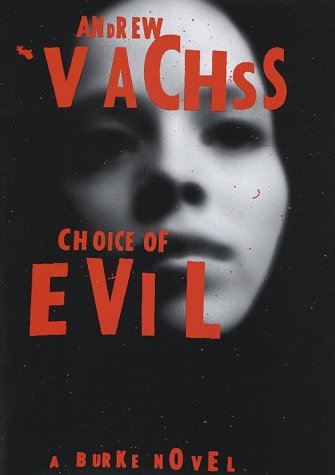 Urban nightmares have been Vachss's stock-in-writing-trade since his debut 14 years ago with the extraordinary Flood. His 11th Burke novel is more nightmare than most, a dizzying shapeshifter of a tale that speeds suspense, vengeance, retribution, magic, bizarre sex play, characters old and new and icicle-pointed prose past the reader in a near blur. After the customary prelude--Burke loses his apartment and must move with his dog to Brooklyn--the action proper begins. The outlaw PI is hired by a group of gay activists to find a vigilante, the self-proclaimed Homo Erectus (HE), who is wiping out gay-bashers around the city; the activists plan to spirit him to safety. Too soon, the case complicates immensely--for Burke but also for readers. Burke's lover was killed a while back in a drive-by shooting of gay protesters. Was HE involved? Why is HE, whom Burke contacts through the Net, so obsessed with Wesley, the stone killer apparently blown up some time ago? Has Wesley returned from the dead? What does the lesbian dominatrix aiding Burke in his search for HE really want? Into this plot mesh, Vachss weaves cameos by nearly all the series regulars--Max the Silent, Mole the technogeek, Strega the witch, etc.--but anyone new to the books will weep at trying to make sense of the relations between them. Vachss's excesses strut through the story--the elliptical narration, the ranting against pederasts, the psychosexual melodrama (""She licked the blood off... sucked until she came, spasming... ""). The plot whips here, there and everywhere, including into extensive but only tangentially relevant flashbacks, via computer messages from HE, of the killer's kidnapping of a girl. Like a furiously spun hand-cranked generator, this angry novel spits out a few sparks, but not enough to distract readers from the real show: that of a talented writer sliding toward self-parody. (May)
close
Details