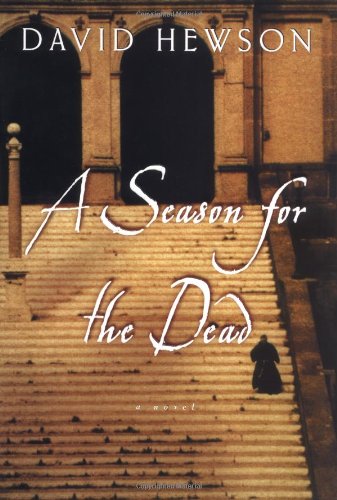 A SEASON FOR THE DEAD

U.K. novelist and journalist Hewson ( ) presents the first in a line of thrillers set in Italy and features detective Nic Costa and an ensemble cast drawn from the ranks of the Rome state police. University professor Sara Farnese is at her desk in the Reading Room of the Vatican Library perusing a 10th-century copy of Apicius's first-century cookbook when former lover and fellow university professor Stefano Rinaldi careens into the room dragging a large plastic bag. Rinaldi dumps the contents of the bag—the freshly flayed skin of an adult male—and quotes the Christian theologian, Tertullian ("The blood of the martyrs is the seed of the Church"), then takes a couple of bullets in the head from a panic-stricken Swiss Guard. Detective Costa and partner Luca Rossi are outside the Vatican in St. Peter's Square on pickpocket patrol when they catch the news of the shooting on a police scanner, charge into the Reading Room and are quickly kicked out by security man Brendan Hanrahan for jurisdictional reasons ("The Vatican is another country"). Rossi and Costa become officially involved when the skinless remains of Sara's lover and the body of Rinaldi's wife are found strung up in an ancient Roman church. After this rousing beginning, the intricate plot spins off in several directions, involving corrupt cardinal Michael Denney, the Mafia, Vatican secrecy and the serial killer who's murdering Sara's former lovers in ways that mimic famous paintings depicting the martyrdom of selected saints. Outsized, eccentric characters, a complex story and an abundance of historical detail make this engrossing book more than just another cookie-cutter, religious-nut serial killer thriller.