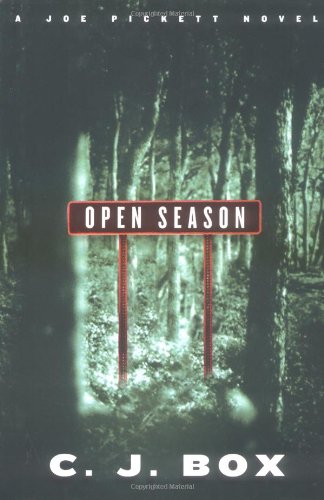 Enthusiastic blurbs—even from luminaries such as Tony Hillerman, Les Standiford and Loren Estleman—can sometimes leave readers feeling as if they must have read a different book altogether. Not this time. Box's superb debut, the first in a series introducing Wyoming game warden Joe Pickett, should immediately make him a contender for best first novel or even best novel awards. Young Joe is struggling to fill the shoes of his mentor, legendary Vern Dunnegan, as warden of Twelve Sleep County, and trying to support his wife and growing family on the meager salary he makes. The hours are long, the work hard but satisfying, and Joe's honesty and integrity would pay off if he could avoid "bonehead moves" like ticketing the governor of the state for fishing without a license, for instance, or allowing a poacher to grab Joe's firearm from him. When that very same poacher turns up dead and bloodied in Joe's woodpile with only a cooler containing unidentified animal scat, his life, livelihood and family will never be the same. Upping the excitement are a couple of murders, local political and bureaucratic intrigue, a high-stakes pipeline scheme and an endangered species that Joe's eldest daughter "discovers." No one has done a better job of portraying the odd combination of hardy and foolhardy folk that make their homes in Wyoming's wilderness areas, or of describing the dichotomy between those who want to develop the area and those who want to preserve it. Without resorting to simplistic blacks and whites, Box fuses ecological themes, vibrant descriptions of Wyoming's wonders and peculiarities, and fully fleshed characters into a debut of riveting tensions. Meet Joe Pickett: he's going to be a mystery star.