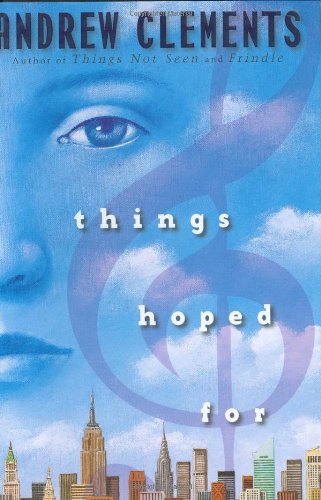 Clements hits no false notes in this beguiling sequel to . Narrator Gwen left her West Virginia home two years earlier to live with her ailing grandfather in Manhattan to attend a music academy on scholarship. The disciplined 17-year-old plays her violin many hours each day, practicing for auditions for a prestigious music college. But her attention is diverted when she receives a phone message from Grampa, who says he is going away for awhile and that Gwen should carry on and tell no one about his disappearance—especially his brother (who co-owns the building in which he and Gwen live and is trying to pressure Grampa into selling it). After she meets Robert (the temporarily invisible Bobby from ), Gwen senses she has found a kindred spirit in this kind, trumpet-playing teen who shares her musical aspirations. She tells him her secret and, after the two notice a man's shadow that has no visible body casting it, Robert confides to her the story of his experience turning invisible. The novel's mysterious strain reaches a crescendo when Robert, in a heartstopping scene, opens the basement freezer looking for steaks and finds something else instead. In her credible, likable voice, Gwen observes that she wants her complicated story to have a tidy ending with "that wonderful last burst of symphonic harmony." This haunting novel's denouement has just that. Not since has Clements's writing achieved such near perfect pitch. Ages 10-up.