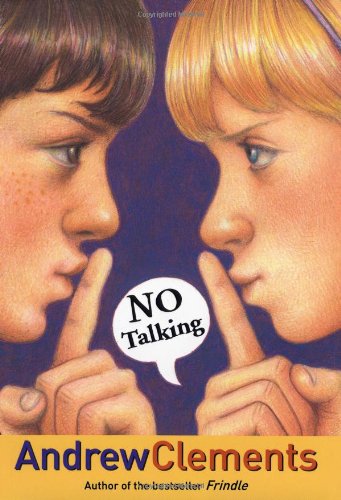 lements's ( ) latest thoughtful school tale opens as fifth-grader Dave researches a report on India. He is fascinated to learn that for years Mahatma Gandhi did not speak at all one day each week to “bring order to his mind.” Dave, an inveterate blabber, tries to keep silent for a day at school, a plan that derails when he cannot contain his outrage at his classmate Lynsey's superficial, nonstop monologue at lunch (“She I wanted that sweater more than anything, and she bought it anyway. And then? After school on Friday at soccer practice? She at me, like she wanted to be friends or something—as !”). After she erupts at his complaint, the pair enlists their entire grade in an experiment to determine which gender can utter fewer words during a two-day period. The rules allow students to answer teachers' questions with a three-word-only response, but they are prohibited from speaking after school is dismissed. Enhancing the challenge is the fact that the fifth grade has a reputation for being particularly loquacious, prompting the teachers to dub them “The Unshushables.” The contest plays out at an occasionally plodding pace, as Clements dwells on the teachers' musings about the competition as they find ways for the kids to learn and communicate nonverbally. Despite the rivalry that started the contest, the longstanding animosity between the boys and girls dissipates as the students bond over the experiment. Presuming the novel doesn't generate similar contests in real life, readers may be compelled to use their voices to praise Clement's deft handling of an interesting premise. Ages 8-12. ( .)