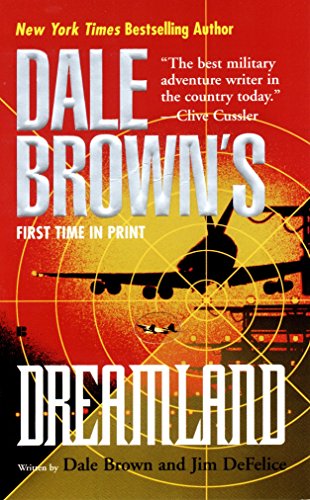 Few novelists can craft an aerial battle scene more strategically than former U.S. Air Force Capt. Brown (, etc.), and he and DeFelice () are in fine form here. Set deep in the Nevada desert, Dreamland is the place where top minds converge to develop cutting-edge artillery and aircraft. The discovery of a spy among the ranks of Dreamland's top pilots unnerves the elite air force personnel assigned to the base and starts a downward spiral in spirits. When Lt. Col. Tecumseh "Dog" Bastian is appointed to keep Dreamland off the Pentagon's chopping block, morale is at an all-time low. Bastian's daughter, Capt. Breanna Bastian Stockard, is one of Dreamland's best pilots, as was her husband, Maj. Jeff "Zen" Stockard, before a training mishap landed him in a wheelchair. Together, father, daughter and son-in-law lead a team into battle-torn Somalia using the Megafortress test bomber, securing Dreamland's funding and restoring its dignity. In such a technically charged story, the sheer number of characters—inconsistently referred to by their nicknames and real names—parading in and out of the narrative only creates confusion. Although experienced military-thriller readers will marvel at the fast pace of this novel, novices may be left behind.