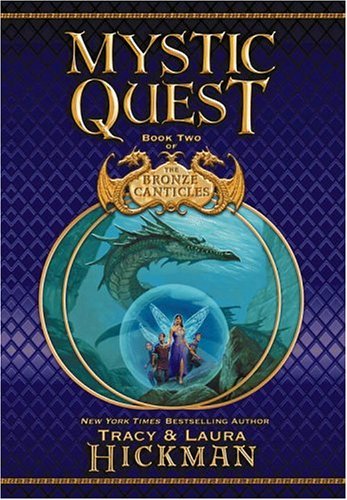 New readers may find it difficult to get into the Hickmans' second installment in their Bronze Canticles series (after 2004's ), with its three complex tales set in the parallel worlds of faerie, goblin and human. In the land of the Five Domains, Dragonkings and Dragonqueens destroyed the Rhamasian Empire more than 400 years before; now they're in conflict with rebel humans who possess the Deep Magic rediscovered by blacksmith Galen Arvad 23 years earlier. Mystics can connect to the other worlds in a dream state, but this ability doesn't really add much to the rambling quest Arvad's sons, half-brothers Caelith and Jorgan, embark on to find Calsandria, fabled Lost City of Gods. In the eerie yet lovely fairie world, Princess Aislynn becomes one of the Oraclyn-loi ("Vision Pilgrims in training") to serve Dwynwyn, queen of the dead, and joins a dangerous expedition to discover another lost city. And in the amusing goblin world, Thux, grand wizard to the goblin emperor, finds himself on another life-changing quest. Hopefully, future volumes will tie these disparate elements into a satisfying whole.