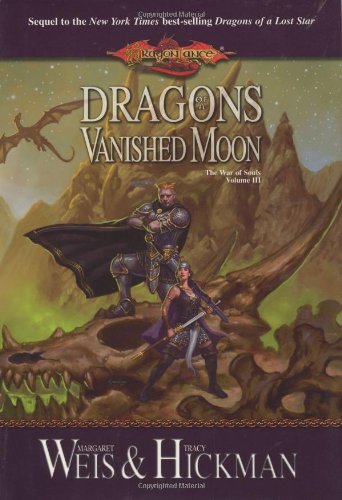 DRAGONS OF A VANISHED MOON: The War of Souls Volume Three

The One God Takhisis has pulled a fast one and vanquished the other gods of Krynn to a place unknown in this fast-paced conclusion to the War of the Souls trilogy (; ). Through the warrior princess Mina, Takhisis (aka the Dark Queen) pretends to do good, heal the sick and comfort the afflicted in her scheme to take over the world. Takhisis's most feared foe turns out to be a kender, Tasslehoff Burrfoot, who possesses the Device of Time Journeying, an instrument that could smash all Takhisis's ambitions with a single push of a button. As Mina takes over city after city, adding more souls to her dread troop, her opponents frantically try to figure out ways to stop her. The Solamnic Knights send one man, Sir Gerard, to spy on Mina by passing him off as a Dark Knight. The elves of Qualinest and Silvanost find common cause in the fight against the Dark Queen, while in a strange twist of allegiances, the dragons of Krynn realize that their survival depends on allying themselves with mortals—which they do with cunning and stealth. At Sanction, all the players come together in a mighty battle to save Krynn and restore the world to its proper balance. Bestselling authors Weis and Hickman have made another admirable addition to the history, lore and ways of Krynn, including a set of useful endnotes to bring newcomers up to speed.