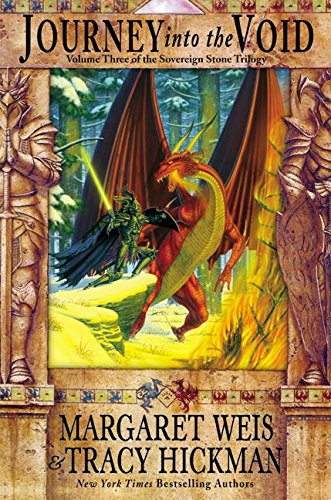 JOURNEY INTO THE VOID: Volume Three of the Sovereign Stone Trilogy

In addition to a host of mostly likable characters and a fast-moving plot, dependable Dragonlance veterans Weis and Hickman provide plenty of neat stuff for the fantasy gamer (Blood-knives, magical jewels, agate-eyed diving sticks) in this highly satisfying conclusion to their epic trilogy. While echoing fantasy giants Tolkien, Eddings and Brooks, the authors infuse a standard quest plot (and rescue of a magical object) with their own insightful investigation into the fruits of war ("the terror within and the terror without"). Taking up where (2001) left off, they follow the path of power-mad Dagnarus (aka Lord of the Void), who started making trouble 200 years earlier in (2000). An obsessive abuser of outlawed Void Magic, Dagnarus not only summons Taan monsters from another world to do his bidding but also reanimates the dead into Vrykryls, "who maintain their unhallowed life by feeding on the souls of those they murder." Having destroyed his father's Old Vinnengael, Dagnarus takes over New Vinnengael, but what he wants most is the reunited Stone that will ensure his eternal reign on Earth. Perhaps mindful of the tender sensibilities of some younger readers, the authors don't overdo the violence. Style may not be their strong suit, but it's a testament to Weis and Hickman's storytelling skills that you can enjoy this book without having read the previous volumes.