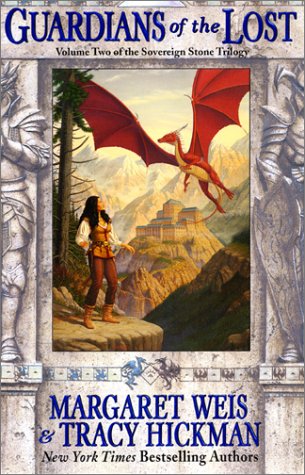 GUARDIANS OF THE LOST: Volume Two of the Sovereign Stone Trilogy

Bestsellers Weis and Hickman (Dragonlance series, etc.) deliver a solid tale peopled by familiar figures (some of whom are Not What They Seem) in the second volume of their latest fantasy trilogy. Two hundred years after the action in , the world of Loerem (conceived by fantasy artist Larry Elmore, who provides the stunning jacket art work) is plunged into war. Old hatreds and new combine with the struggle to recover all the pieces of the Sovereign Stone to uproot the characters, sending them running across lands turned hostile. While much of the work fits the classic fantasy quest tradition, the authors do manage to impart some subtle differences, such as basing cultural traits and the magic used by each race (human, elf, dwarf, ork) upon an unusual associated element. (Orks are the water race and rule the seas, while the fire-using dwarves are master horse riders.) Dagnarus, Lord of the Void, is also not the quintessential outsider that most evil overlords tend to be. Instead, he's a Mordred figure, struggling to claim what he believes is his inheritance. In places the narrative turns expository, in order to aid readers wishing to role-play in the setting. Elsewhere, the collaboration reveals its seams, as when the same object is repeatedly given two names (blood knife/bone knife) or when a long-separated elven wife and husband immediately separate after embracing, "for elves consider public displays of affection to be boorish and intrusive." The target audience, college-age readers and their teenage kin, should be well satisfied. (