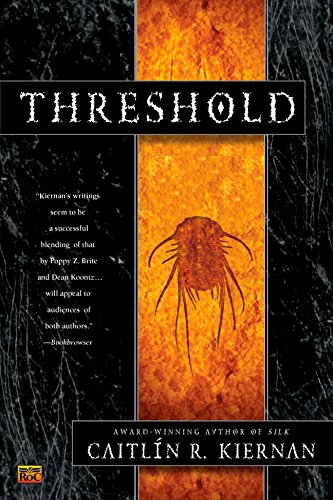 (1999), Kiernan's first novel, established her as a leading exponent of the generation-X horror story. This ambitious sophomore effort is a bold step backward: a distinctively modern tale that invokes cosmic terrors redolent of past masters H.P. Lovecraft and Algernon Blackwood. Set in present-day Birmingham, Ala., the novel centers on Chance Matthews, a promising young paleontologist left bereft by the recent deaths of friends and family. Chance and ex-boyfriend Deke Silvey, a loser with latent psychic powers, wallow in self-destructive angst until they're sought out by Dancy Flammarion, a strange teenage girl who claims to be pursued by monsters. Details of Dancy's wild story inexplicably jibe with an anomaly Chance finds in the fossil record, and a pattern gradually emerges that points to an inconceivably ancient entity surviving from Earth's prehistory that is consciously shaping their lives and miseries to suit its inscrutable purposes. Kiernan rises to the challenge of evoking incomprehensible horrors by skillfully deploying symbols that suggest much more than they show. Her oblique and dreamy prose style slows the narrative to a torpid crawl in spots, but ultimately contributes to the thick atmosphere of dread that supports the novel's weird events and sustains its mood of inarticulable terror. A finale that veers unexpectedly from a seemingly inevitable display of supernatural fireworks to a subtly disarming denouement only underscores the intelligence behind this carefully crafted tale of awe-inspired nightmare.