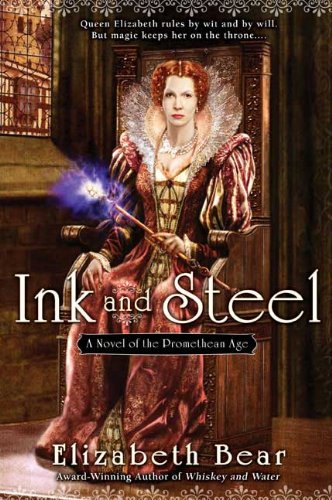 Ink and Steel: A Novel of the Promethean Age

Campbell-winner Bear reveals the secret war between fae and the Elizabethan court in this dramatic prequel to and . Framed with the intrigues of queens and courtiers, the story focuses on the mutual respect and growing love of Kit Marley (aka Christopher Marlowe) and Will Shakespeare. As Morgan le Fey rescues Kit from assassins, various factions recruit Will to bolster their political machinations with the magic of poetry. Kit pulls Will into Faerie and both are forced to face their own deepest desires and fears, which cannot be resolved until they deal with a power even higher than mortal Queen Elizabeth or fae Queen Mab. Copious quotes and intelligent speculation about their lives and works mark this sensitive and sensual look at the two supreme playwrights of the English Renaissance. The story's second half, , is due out in August.