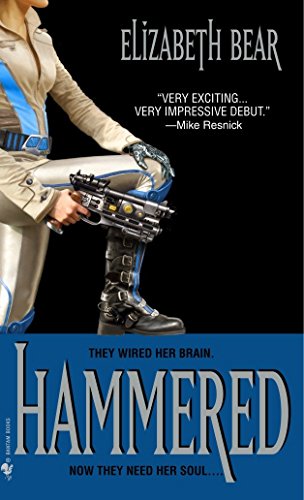 Drugs, gangs and Internet warfare run rampant in Bear's ambitious debut novel, an SF thriller set in 2062. Jenny Casey, a former Canadian special forces warrior who's half-machine as the result of an accident years earlier, is living in Hartford, Conn., when a scientist working in need of the perfect subject for a high-stakes virtual-reality project puts Casey in his sights. Casey becomes a pawn in a furious battle waged in the corridors of the Internet, on the streets of battered cities and in the complex wirings of her half-manmade nervous system. As she approaches her 50th birthday, Casey manages to maintain a good sense of humor, a trait unfortunately lacking in the rest of the cast, which includes an old flame, a gangster named Razorface and a female ex-con who befriends the heroine. Bear's often jagged prose ("We disembark in Brazil, which has the distinction of being one of several countries I've been shot at in. Shot down over, even") suits the frequent, at times confusing narrative jumps between the virtual and real worlds. Though readers may have difficulties following this sometimes chaotic story, advance praise from such SF pros as Mike Resnick, Richard Morgan and Peter Watts should ensure a strong start.