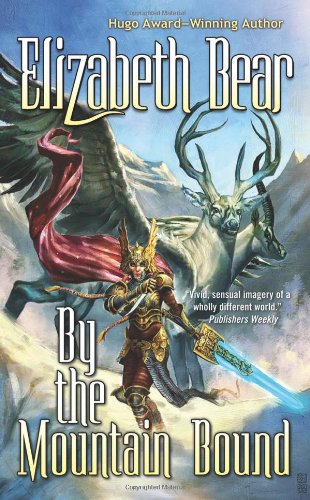 By the Mountain Bound

In this complex prequel to Hugo-winner Bear's (2008), Ragnarok has already occurred, but the world must still be cleansed of the residue of the former realm. When immortal war-leader Strifbjorn rescues a strange woman from drowning, she claims to be the Lady, a long-awaited deity, and defeats Strifbjorn's champion and lover, Mingan the Gray Wolf, to take command. The ensuing internal power struggles set the at odds while the Lady attempts to rally the community against a supposedly imminent attack by giants. Numerous fantasy authors adopt the tropes of Norse mythology, but Bear actively pursues them, channeling those myths directly rather than overlaying them on more familiar ones. The result demands much from readers, but repays it in vivid, sensual imagery of a wholly different world.